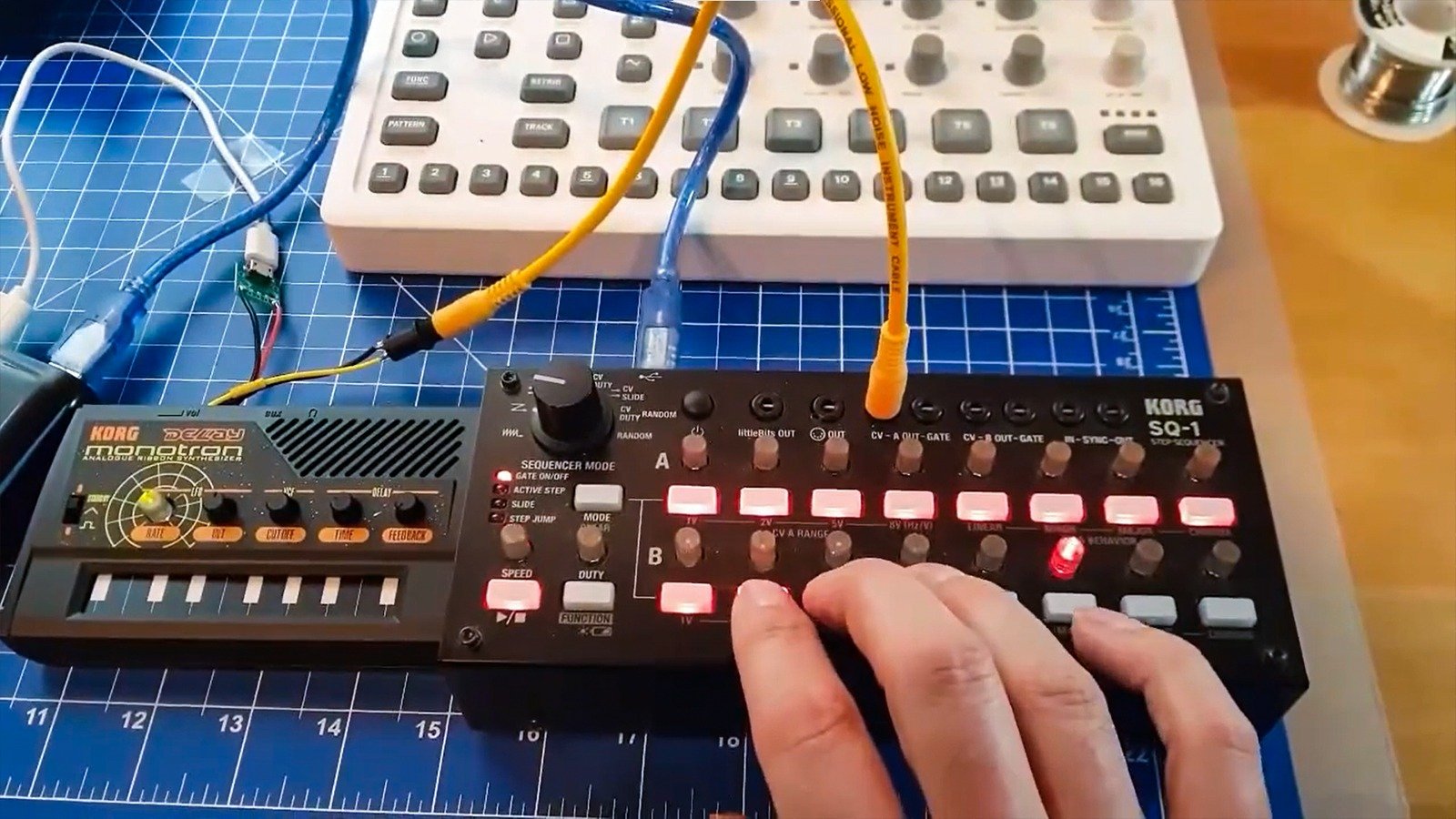 I made a first attempt at adding CV in and an external power supply to a Korg Monotron Delay:

For the power I simply used an external power bank and connected 5V and GND to the respective pins on the Monotron. 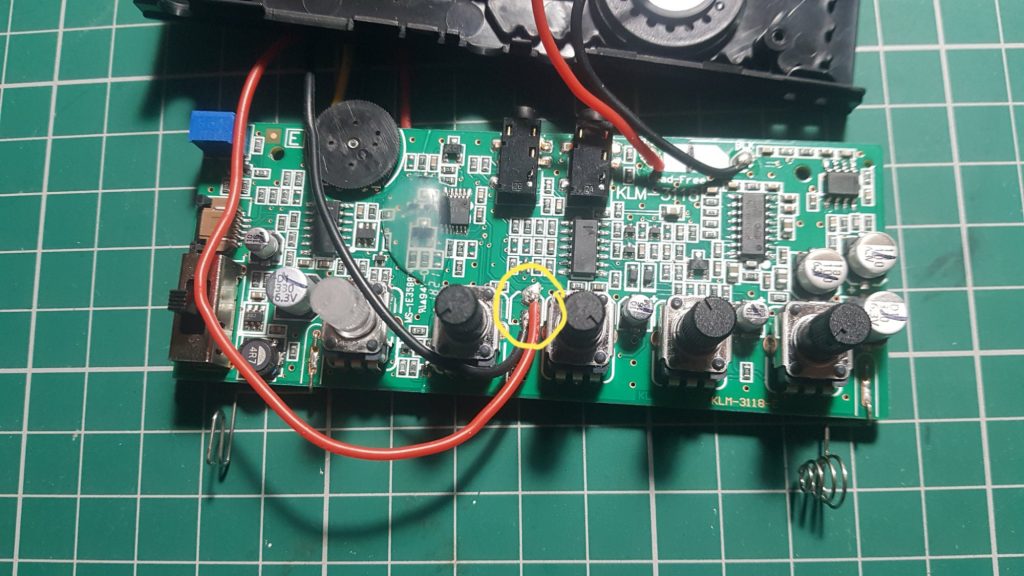 The 5V CV signal from the Korg SQ-1 goes into the gate pad on the Monotron. It kind of works, but tuning is quite tempera(ture)mental. 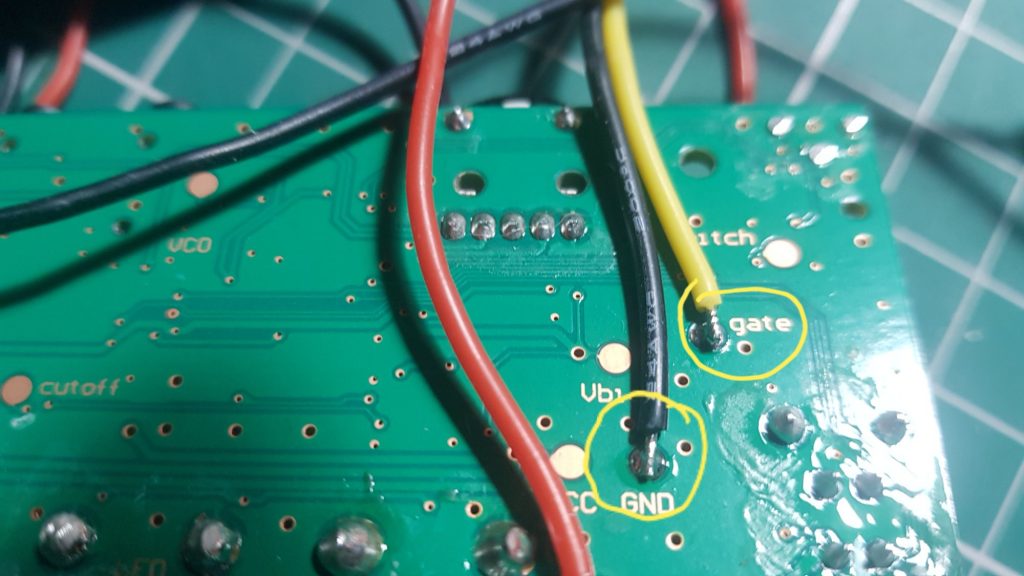 Apart from temperature the pitch is directly dependent on the Monotron’s supply voltage, so I would either need to step down the USB voltage to ~3V and make use of the boost converter that is built into the Monotron to get 5V, or use a higher voltage power supply and regulate it down. Any idea what’s better?🤔 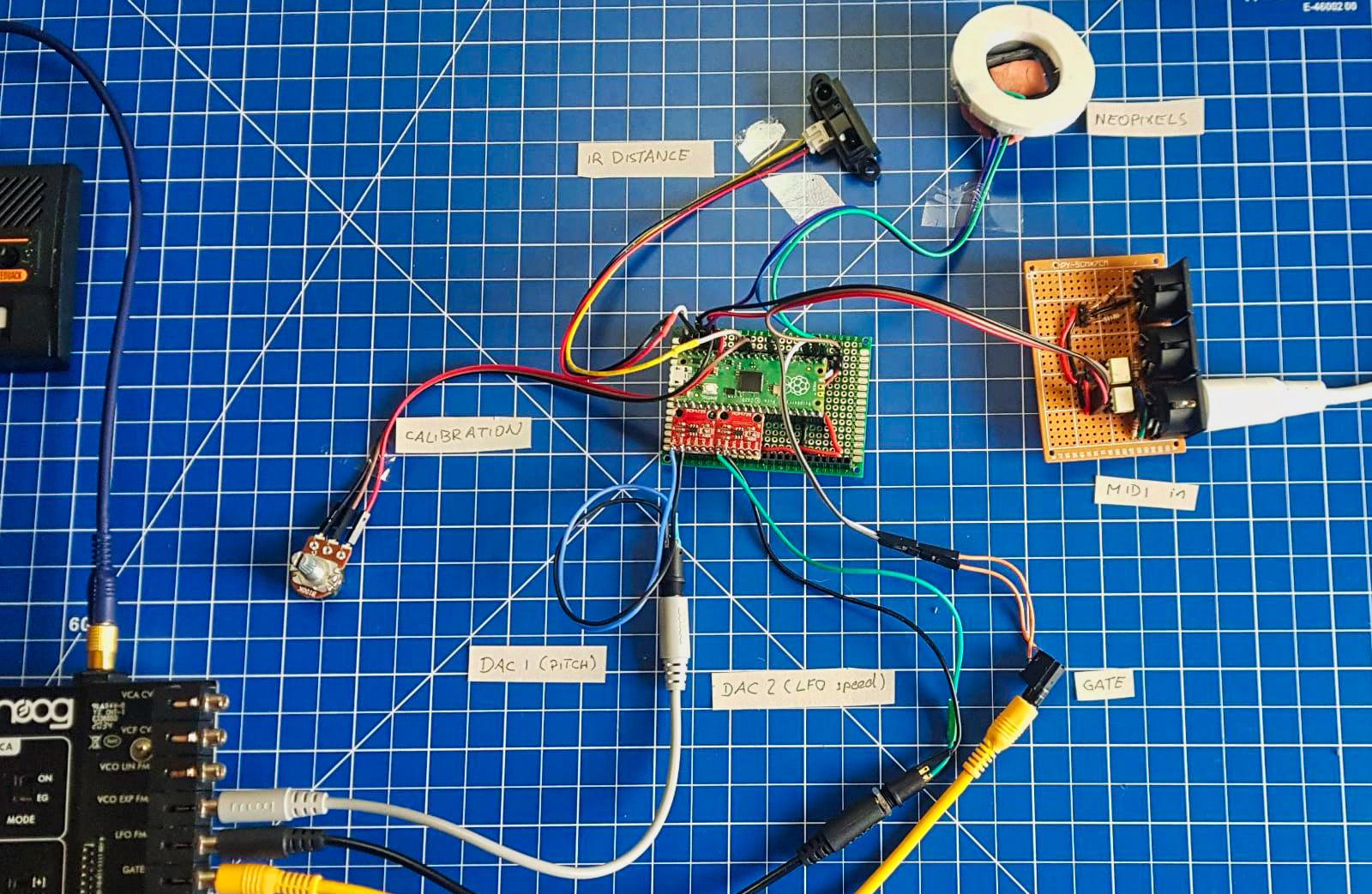 In the first part of the series we built a MIDI to CV converter using MicroPython on the Raspberry Pi Pico. Check it out here if you haven’t done so already.

This time we’ll add a second CV output, as well as a distance sensor as a modulation source and a Neopixel ring to visualise its output.

In the above video the Elektron Model:Samples is set up to generate MIDI notes on track 6, which are sent to the MIDI input on the Pico. This generates a gate signal and pitch voltage (on CV1) for the Moog Werkstatt-01.

The distance sensor’s analogue output is visualised by the Neopixel ring as well as sent to CV2, which I have connected to the Werkstatt’s LFO FM input. This allows me to control the speed of the LFO, which is in turn modulating the cutoff frequency of the bassline. Wobble ensues…

Finally, the output of the Werkstatt goes to a Korg Monotron Delay, which is used to further filter the bassline and to add a touch of delay.

Given the multitude of in- and outputs I decided to make a semi-permanent perfboard setup with headers for the Raspberry Pi Pico and the two MCP4725 DACs.

Since space was a bit too tight for an onboard MIDI socket I am using an external daughter board, connected via jumper wires, as are the calibration pot, distance sensor, gate output and Neopixel ring.

I have added a calibration pot to the setup, as the DACs’ output voltages are directly related to VBUS (i.e. the voltage of the USB supply), which is currently used as their reference voltage. In a future revision I may add a voltage regulator to power the project with a more stable 5v.

The two DACs are connected to I2C1 on the Pico and have the addresses 0x62 and 0x63 (by soldering a jumper on one the boards). For now I simply soldered a 3.5mm jack socket to the VOUT and GND pins of each of the DACs. Eventually I may add another header on the perfboard instead.

The eagle-eyed will have spotted that there are headers (and some of the wiring) for two more DAC modules to create a possible 4CV outputs. In order to use these a second I2C bus will be needed (I2C0 on the Pico).

The code is written in MicroPython. Its external dependencies are:

I have set up the functions polling the calibration pot and distance sensor ADCs to be called by a timer each, running every 100ms and 50ms respectively. For now these are just arbitrary numbers that seemed to work ok and hopefully leave enough clock cycles for the midi note commands to be tight.

The calibration pot is set up to fine-tune the expected reference voltage, from 4.5V to 5.5V to compensate for slightly different input voltages (for example, my PC’s USB port only delivers around 4.95V, whereas my phone charger outputs 5.1V). 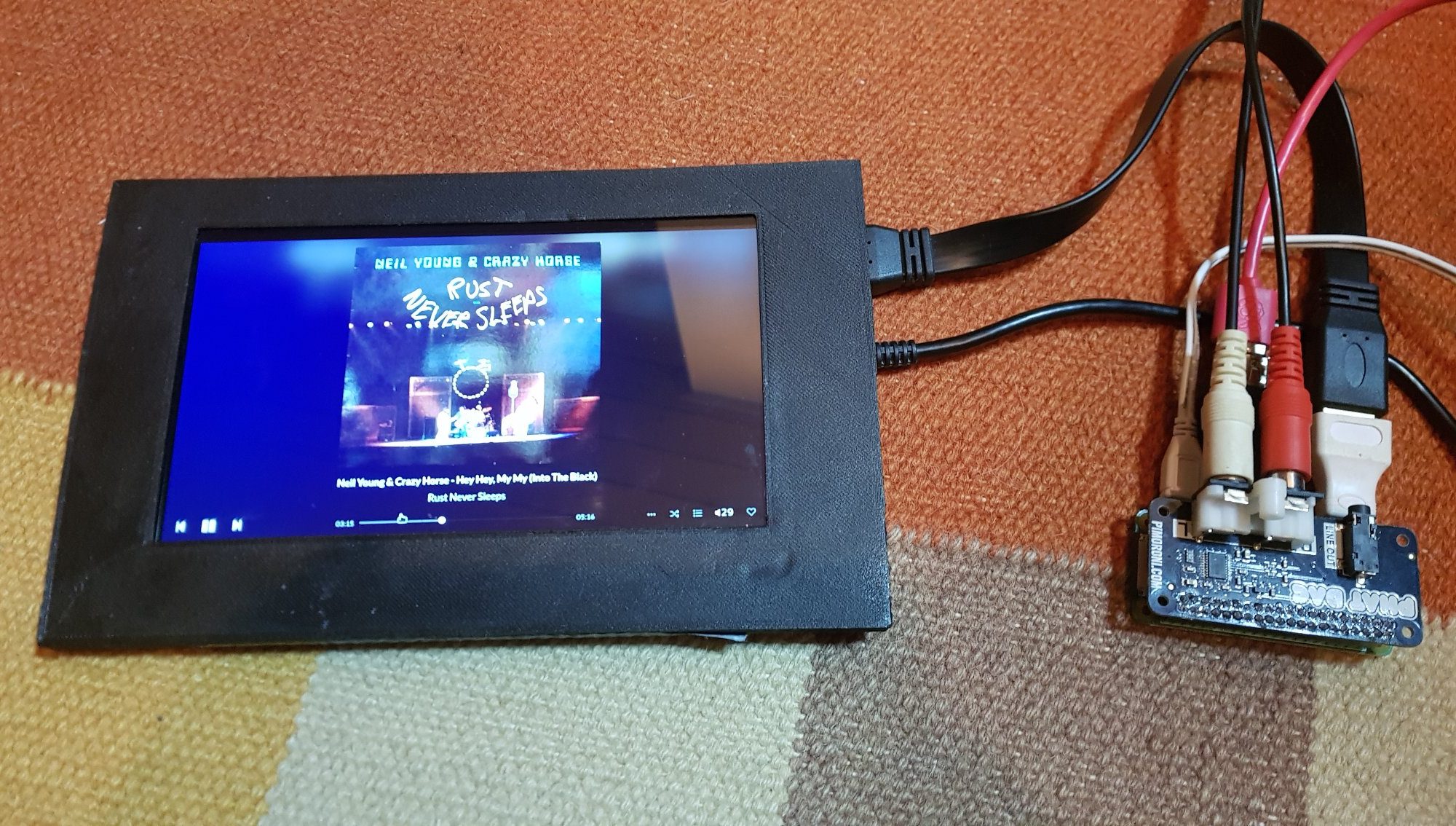 This weekend I had a break from Pico experiments and instead explored alternative ways to listen to Neil Young post his Spotify exodus. Got my Raspberry_Pi Zero W, Waveshare 7″ touch display and Pimoroni pHAT DAC running beautifully with the open source Moode audio player. 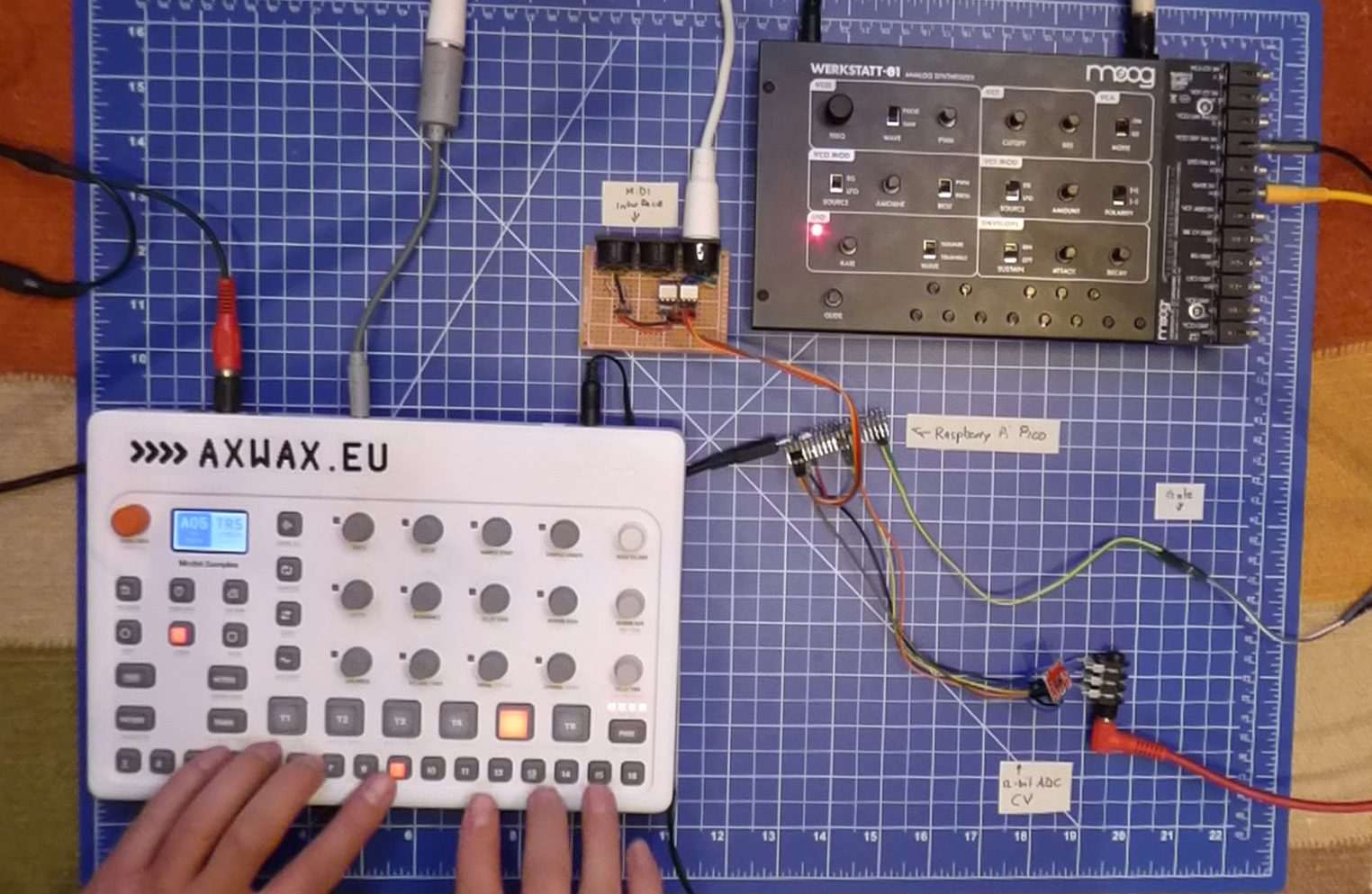 I’ve been toying with the idea of building a MIDI to CV converter for at least a decade. Now I’ve finally had a go using MicroPython on the Raspberry Pi Pico.

Here’s how I managed to control my Moog Werkstatt-01 over MIDI using the Pico, a handful of components and a MCP4725 12-bit DAC:

The code is written in Micropython. Its only external dependency is the SimpleMIDIDecoder class by @diyelectromusic. You can download the latest version on GitHub here: SimpleMIDIDecoder.py. 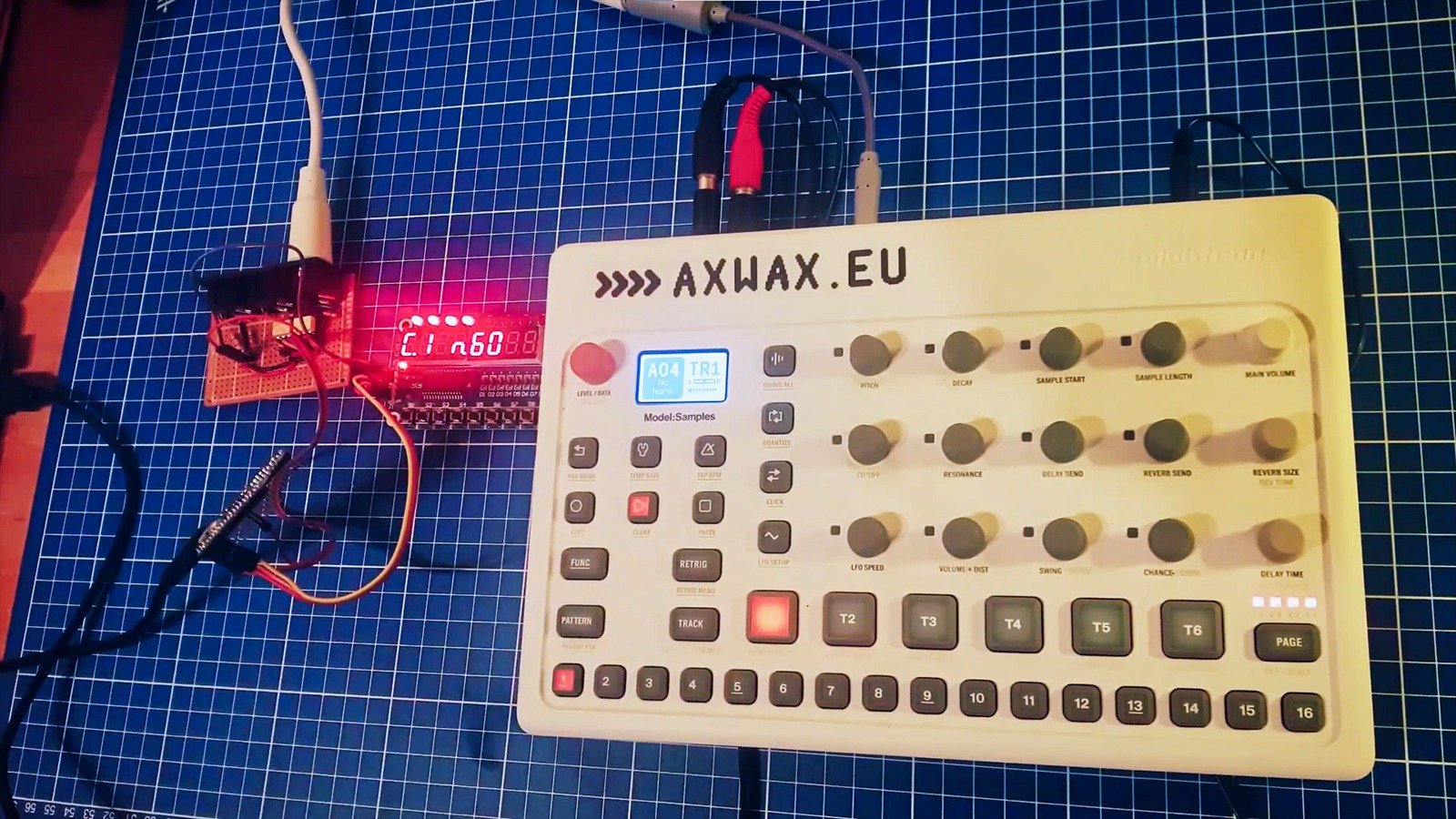 This evening I had some fun with @diyelectromusic‘s SimpleMIDIDecoder MicroPython library and the TM1638 LED&KEY module. The display shows MIDI channel and note number and the LEDs light up depending on velocity.

This is running on the Raspberry Pi Pico and also requires mcauser’s TM1638 library.
Here’s the (slightly rushed) code:

hosted with ❤ by GitHub 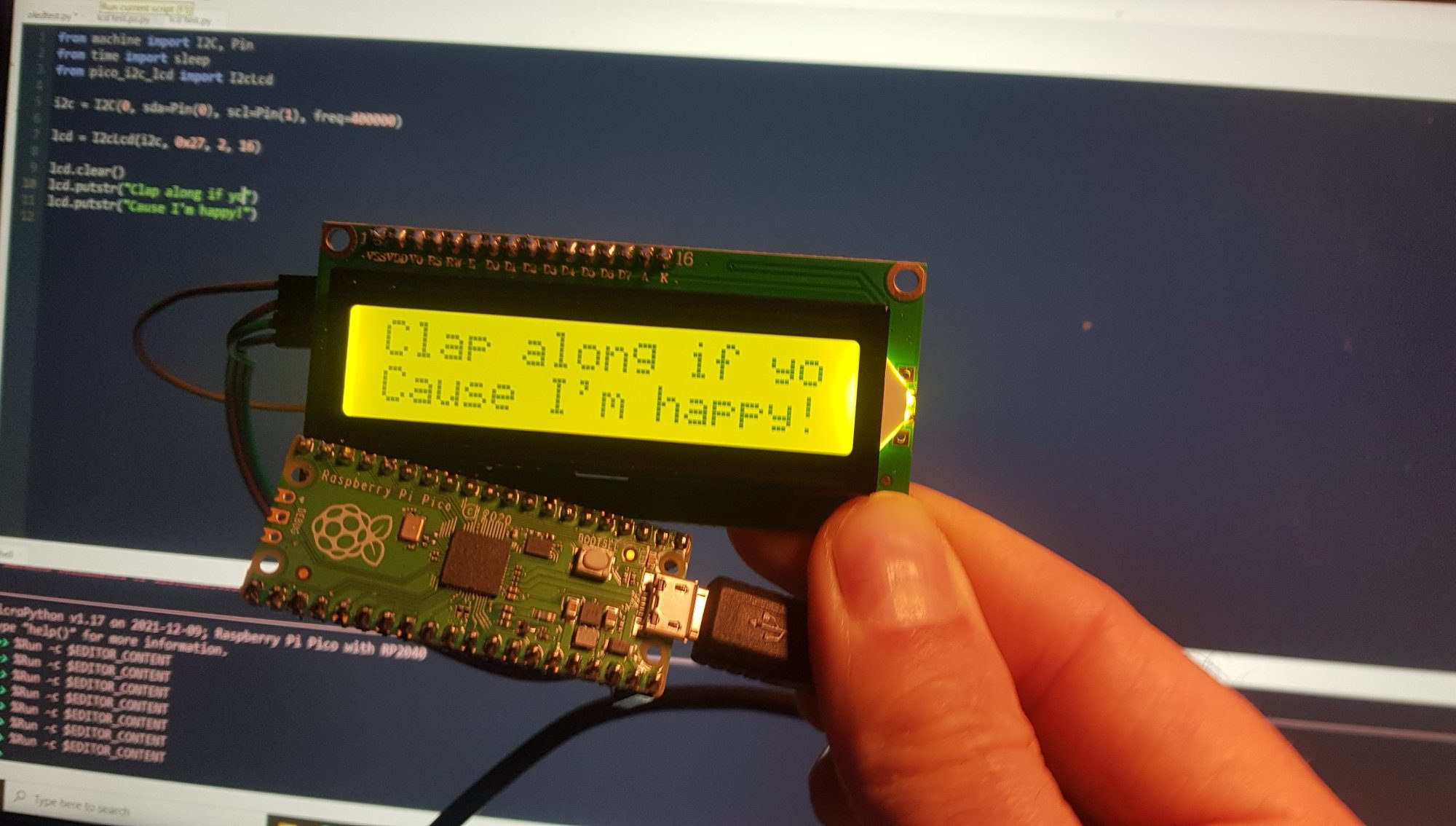 I spent longer than I care to admit on failing to get either a TM1638 LED, an SH1106 OLED or a 1602 LCD to work with my Pico. Turns out one of my jumper wires had an intermittent fault 🤦
After a wire transplant everyone is finally happy!

Kevin started his life when my then flatmate found him in a bargain bin for 25p. Once the inbuilt button cell battery had depleted she let me have a play with it.

Initially I simply hooked him up to our doorbell, whose 433MHz signal gets converted into MQTT messages through Sonoff’s RFBridge running the excellent Espurna firmware: